Recently, CanberraUAV was invited to a robotics exhibition at the Croatian Embassy in Canberra. Along with other groups from around Canberra (including the Croatian Rococup team!) we hosted over 1000 visitors throughout the day.

We had an autonomous rover running in the courtyard, though some of the children preferred driving it themselves! Additionally, we had several of our fixed wing and rotary airframes on display and a simulation of a UAV flight.

A great day was had by all, and we would like to thank the Croatian Ambassador Damir Kušen, for inviting us along. 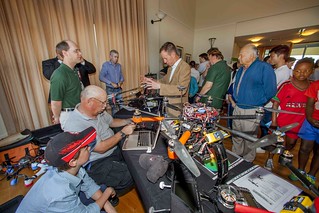