Over the last couple of months we have been designing and building a hybrid quadcopter-airplane as a potential airframe for the 2016 UAV Challenge.

The reason for this is given the distance and speeds required (up to 60km in 40 minutes, not including headwinds) for the UAV Challenge it was suspected that a traditional helicopter might not have the range/speed required.

The hybrid platform includes 4 vertical lift propellers (much like a quadcopter) for vertical takeoff and landing, in addition to wings, tail and horizontal thrust (small IC engine) for fixed-wing flight. 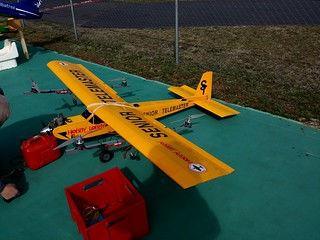 Using 2 pilots (1 on the quadcopter controls, 1 on the fixed-wing controls), the first flight was a success! The airframe was transitioned between the two flight modes multiple times with no loss of stability.

Next is to hand over more control to the flight controller and automate the takeoff, landing and transition sequences.